Recently, the analytics of human resources and team co-operation has become a “new black” of staff management, gaining a great deal of interest and general acceptance. At the same time, most companies lack a full understanding of the importance of human resources and team network analysis in the management of a company’s team performance, as well as in business processes and development. The Deloitte Human Capital Trends Report 2019 shows that only 26% of companies make effective use of technology and analysis, despite the fact that 71% of companies mention human resource analysis as a top priority.

Historically, human analytics has been based on attribute analysis using two types of attribute data: traits that are facts about individuals that do not change (ethnicity, gender, employment history), and status, which involves facts about people that do change (age, level of education, value of bonuses received, length of service, etc.). Attribute analysis is necessary but not sufficient. 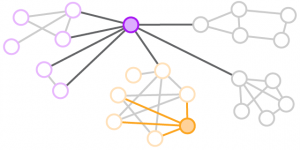 Those team members that are highlighted in green are closely related to each other, thus showing a high internal density, which shows that the co-operation in this team is very good. The external connections of the team members do not overlap, meaning the team has a high external range, which provides greater access to external resources. This example shows that analysis of the attributes above helps to identify qualified employees, but does not ensure efficient work on time. In turn, relational analysis is necessary to predict the most effective solution, because it determines the chemistry of team interaction, as well as the ability to use and apply external information and knowledge.

Contribution to the overall business process

“There are two possible paths to team co-operation analytics,” said Oliver Kasper, director of human resource analysis and digital HR at Swarovski. “One way is to look back and account for what happened in the past. In turn, the second path leads to the future – forecasting and providing solutions based on analytics. In my opinion, only 1-2% of companies take the second path. Similarities can be seen in the differences between a steam train and an electric car – reporting is the steam train, while forecasts and solutions are the electric car. ”

The above example highlights the true depth and value of team co-operation analytics, which is not just about improving collaboration and communication, but also improving the company’s overall processes.

Team co-operation analytics is a new way for a company and organisation to make data-driven decisions that provide an opportunity to assess the probability of a team, employee, or organisation in general to achieve a goal, creating a more productive, healthier and successful organisation.

SIXT: How to be together without being together?